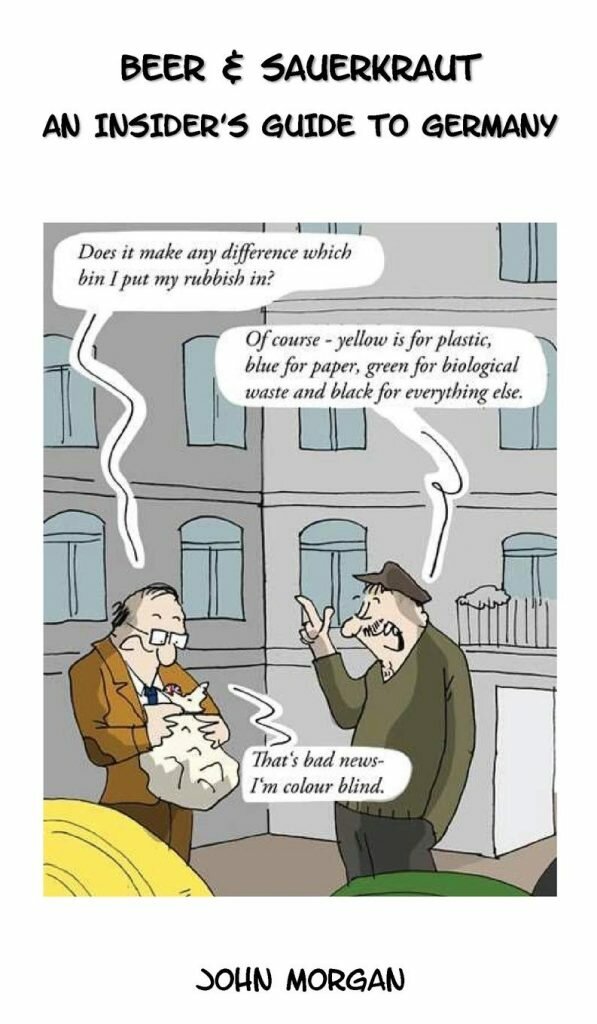 John Morgan was born in the UK in 1938 and qualified there as a chartered surveyor.

He moved to Zurich for three years in 1969 to work for a US conglomerate.

He then moved to Germany, where he eventually established a successful property consultancy firm together with a Dutch partner, selling this in due course to a German bank.

John has a German wife and four sons and now lives in retirement on Lake Constance. Having dual nationality and conversing today mostly in German, he is now uncertain whether he is British or German!

Art was one of my worst subjects at school because my drawing skills were so poor. You may, therefore, well ask why I decided to produce what at first sight appears to be a cartoon book. The answer is that this is not simply a cartoon book but is full of information about life in Germany, presented (hopefully) a humorous way with the assistance of appropriate cartoons. However, the cartoons are an essential part of trying to explain life in Germany, since as everybody knows, a picture says more than a thousand words and cartoons assist in demonstrating the funny side of various situations.

In an ideal world, I should have drawn the cartoons myself but since my skills lie elsewhere, I did the second-best thing and looked for a cartoonist prepared to convert my ideas into good cartoons. I suspect there aren’t too many good cartoonists who would be prepared to work up my crazy ideas into cartoons and my first attempt to find somebody to do so was indeed a dismal failure, because we simply weren’t on the same wavelength. However, my second attempt made up for all the frustration that built up by my failure and the cartoonist in question, Hannes Mercker, turned out to be just the person I needed.

In the course of the work, I occasionally wondered if Hannes, being a German, might be insulted by some of my ideas but he has such a good sense of humour that this was never a real danger. In fact, in the course of creating the cartoons, he often realised himself for the first time how strange certain aspects of life in Germany may appear to be to the uninitiated.

Although Hannes only lives just over an hour by car from my home, we never met up personally until he had finished all the cartoons, our work together being solely by sending sketches to and fro by e-mail and the occasional long telephone conversation.

Although it is always enjoyable to see an idea develop into reality over a number of months, there comes a point where one is happy to finish a project. However, in this case it was also a sad to realise that our joint work was now at an end, at least for the time being.

Second – Being surprised by the cartoons

Although I had the basic ideas for the cartoons and usually sent Hannes both sketches and a description, so that he would understand what I wanted, I often had a hearty laugh when I opened an e-mail with his first sketch and saw what he had come up with.  Although the input he received from me was quite detailed in most cases, I left him complete discretion in drawing the cartoons illustrating the “useful idioms” in my book. In daily life, one becomes so accustomed to these idioms, that one seldom wonders what pictures foreigners might conjure up in their minds when they hear something like: “I laughed my head off!”

Third – suddenly being hit by an idea

Sometimes I was doing some sightseeing with my wife, meeting together with friends or having my hair cut when somebody happened to say something that threw up a picture in my mind that resulted in idea for a new cartoon being born. Obviously, when I decided to produce this book, I already had concrete ideas for some of the cartoons but once I started the work, new cartoons ideas just happen from time to time.

Fourth – Finding out something I didn’t know previously

Some of the content of my book might be classified as what my wife might describe as “useless information”! I must confess that she might not be alone in having no interest whatever it how many breweries there are in Germany or how many varieties of sausages are produced in the country! However, I found this information not only mildly amazing but it also helps explain why many foreigners associate Germany with beer and sausage. Unfortunately, in the course of my research I didn’t have the satisfaction of finding out why Germans in general enjoy in running around naked on many of the special beaches reserved for nude bathing or in the mixed saunas, whereas the Anglo-Saxons generally have something of a hang-up about being naked in public. I must admit that it took me about 20 years to become Germanised in this respect, much to the amusement of my wife!

Fifth – seeing my book in print

I had problems deciding what format to make this book. On the one hand, I wanted to provide the reader with some serious information about Germany but, at the same time, I wanted the cartoons to have pride of place. To make certain that I had found the right solution, I had some copies of this book printed off and bound before everything had been put in its final form. When I picked up these printed versions hot from the press, this really gave me a kick, as I was at last certain that I had found the right solution and thoroughly enjoyed the sight of my creation. Writing itself is certainly a rewarding creative occupation but seeing the result in a physical form is a reward one can touch!

John Morgan was born in Chatham, Kent, in 1938 and his first memory is of sleeping in an Anderson air raid shelter in 1940- 1941, whilst the German air force was bombing Chatham Dockyard and surrounding areas day and night – John’s father and many of his family worked in the dockyard, building and repairing ships for the Royal Navy.

Having attended Sir Joseph Williamson’s Mathematical School, Rochester, John trained to become a chartered surveyor, qualifying in 1959, when he also married a German girl, who completely changed his views on both Germans and Germany, as well as giving him an interest in learning German. After working for some time in London, he became a partner in a firm of surveyors in Maidstone but left in 1969 to take up the post of European director of real estate and construction for a large American conglomerate with European headquarters in Zürich. His work extended from Sweden to Greece and from Dublin to West Berlin but most of his projects were in the UK, Germany, Holland and France.

John’s wife died suddenly only a few months after the family moved to Zürich, his three sons being only aged seven, five and 18 months’ when this disaster struck. John’s firm immediately employed a full-time housekeeper for him and in 1971 he met and married an attractive German nurse, Marlies, then working in Zürich, who at the tender age of 23 was brave enough to take on John and the three boys. Within a matter of months, the family language became German. John and Marlies had a further son in 1975 and in the meantime have some 10 grandchildren.

In 1972, the family moved to Frankfurt, where John set up and ran a commercial property development company for a British group for a few years. At that time there were no qualified property advisers in Germany and in 1979 John and a Dutch partner filled the gap by founding a firm of commercial property advisers that became the leading firm of its type in Germany, eventually having eight offices and some 300 staff.

Having sold the property consultancy business to a German bank, John returned to the UK in 1994 to carry out research for a PhD in sociology and real estate economy at Reading University, being awarded his doctorate at the beginning of 1998. He then returned to Germany and worked as a consultant for several years before finally fully retiring in 2010.

Over the years John was a regular speaker at real estate conferences in Germany and the UK and wrote numerous articles for German newspapers and journals, as well as being a contributing author in respect of several textbooks in German concerning property investment. In 2017 John wrote his autobiography with the title Chartered Survivor.

John now lives on the German side of Lake Constance, in the village where he met his second wife at a carnival in 1971. He is, of course, bilingual and has both British and German citizenship. He no longer knows whether he dreams in German or in English and has a serious personality conflict when Germany plays England at soccer!